Tennis Strategy and Tactics - How To Become A Smarter Player

Your first encounter with tennis strategy and tactics probably happened early in your tennis career. You quickly realized that there is more to tennis than just fancy technique.

Actually, you realized that technique doesn’t mean anything against experienced players.

Some of them play all sorts of shots with sometimes awkward, sometimes funny movements and yet they win matches. And some of them have great technique and can make you realize that you are a tennis padawan.

They are masters of tennis strategy. They know how to deal with any situation and know how much they can adapt their style of play so that they are still successful. They don’t beat themselves and if they happen to lose, the opponent was really the better player.

What is their secret? First, they are crystal clear on how they play the game to be most successful. They know exactly what their style of game is, what their strengths are, what their weaknesses are and how to make the best of both.

And what they also know is what their opponent's preferred style of play is and how they will likely play. They realize that even in the first few minutes of the warm up.

When an experienced player – a tennis master strategist – starts his warm up, he attentively watches and observes his opponent. He looks for weaknesses in technique, movement, weight transfer, reaction time and overall tennis knowledge of his opponent.

He makes mental notes about strengths and tendencies about the preferred type of shots that his opponent is using. He also observes the mental characteristics – whether his opponent is nervous, over-activated, quickly annoyed and how he approaches the match – is he overconfident, respectful or not believing that they have a chance.

Yes, all these nuances can be spotted with a good eye and lots of experience in tennis in the first 5 minutes of the warm up. Many more information will come during the match, but an experienced tennis strategist will already have a plan before the first point is played. His plan will be based on his preferred tennis strategy and perceived opponent’s preferred strategy of play.

So what is strategy and what is tactics?

Tennis strategy is one of the four main areas of the game – besides technique, physical preparation and mental game.

The broadest definition of tennis strategy is using your advantages – natural and learned ones against your opponent's weaknesses in order to gain advantage and win more points. Your advantages and your way of playing the game are called game type.

Another view on strategy is that it's an overall plan how to play against a certain opponent on a specific court.

Tennis tactics, on the other hand, are more detailed ways of achieving this general strategy. If your main strategy is playing aggressively from the baseline, your tactics to do that can be different.

So this is using the same strategy (aggressive baseliner) but with different tactics.

Even smaller units in tennis strategy and tactics are tactical decisions. These are actually the building blocks of a single point. Every time the ball comes over the net, you need to decide. 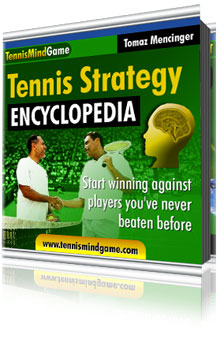 This is the first chapter of the Tennis Strategy Encyclopedia eBook. It covers every (well, almost :)) aspect of tennis strategy from:

Win More Matches When It Matters Most